Milestones: Fifty years of hospice and palliative care in Germany

ONLY 101 DAYS TO #EAPC2019 … AHEAD OF THE 16TH WORLD CONGRESS OF THE EUROPEAN ASSOCIATION FOR PALLIATIVE CARE (EAPC) TO BE HELD IN BERLIN, GERMANY, 23 TO 25 MAY 2019, WE BRING YOU SOME SPECIAL POSTS TO WELCOME YOU TO BERLIN.

Today, Professor Dr H. Christof Müller-Busch, University Witten/Herdecke, Germany, describes some of the many milestones in the development of palliative care in Germany and welcomes you to Berlin.

It was in 1969 and the early 70s that chaplains, physicians and medical students first encountered Cicely Saunders, resulting in a German television documentary about St Christopher’s Hospice: 16 Days to Go. Hospice Care for the Dying in London. The film led to controversial discussions about the need of special ‘Sterbekliniken’ (‘hospitals for the dying’), a concept mainly opposed by church leaders. Consequently, the development of palliative care in Germany was considerably delayed compared to other countries. The first palliative care unit was opened in Cologne University Hospital in 1983. At the same time, in both parts of the then divided Germany, pioneering homecare models for the care of the dying were introduced with very little public and financial support.

In the 90s, in a now united Germany, ‘Staying in motion’ was the drive from many committed people from different professions to develop palliative care qualifications and structures in different healthcare fields. The foundation of the German Hospice and Palliative Care Association in 1992 and the German Association for Palliative Medicine (DGP) in 1994 were important milestones. From 1997 onwards, came the implementation of various curricula in palliative care for different professions; the first hospice law was passed in 1996, and then in 2007 a law enabling everyone in need to have access to specialized outpatient palliative care (SAPV). 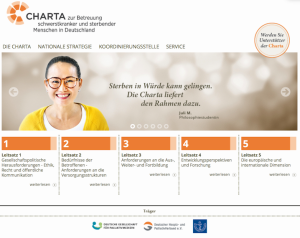 The Charter for the Care of the Critically Ill and the Dying launched in 2010.

Being there and pointing the way

This describes the development in the past 10 years. More than 3,000 hospice and palliative care services across the country are registered in a guide, which is available in nine different languages. A multicultural approach and the prevention of suffering by early integration of palliative care drives more than 5,700 DGP members involved in care services in varying areas. The ‘Charter for the Care of the Critically Ill and the Dying’ in Germany was launched in 2010 as part of the Budapest Commitments [a joint initiative of the EAPC, International Association for Hospice and Palliative Care (IAHPC) and Worldwide Hospice Palliative Care Alliance (WHPCA)], and formulated recommendations as the basis for a national strategy. The S3-Guideline Palliative Medicine (1st part 2015 and 2nd part 2019) – provides evidence and consensus-based recommendations for best practice in palliative care for patients with incurable cancer in 15 important topics, with more than 60 multi-professional and interdisciplinary institutions and 150 experts actively involved. 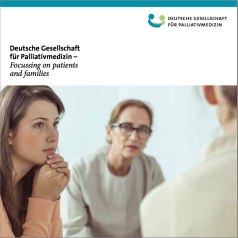 Many years ago, Better dying in Berlin was our statement to promote palliative care in Berlin. We’ve come a long way since then and it will be another milestone and an honour to host #EAPC2019 for the first time in Berlin, our exciting and, in many aspects, fascinating and reunited capital.

More about the author …

Prof Dr H Christof Müller-Busch, PhD, MD University Witten/Herdecke, was President of the German Association for Palliative Medicine (DGP) from 2006 to 2010. In 2008, he launched the ‘Charter for the Care of the Critically Ill and The Dying in Germany’.