Budapest Commitments: the status in Denmark 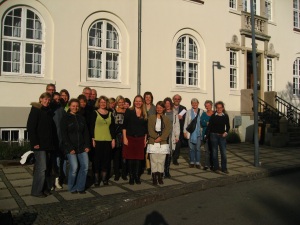 Joining the Budapest Commitments in 2007 we set ourselves two main goals:

How have we done?
At the 11th EAPC Congress in Vienna (2009), we reported an increase of more than 40% in the number of members in the first period and a questionnaire survey revealed a 14% increase in full-time research positions during one year. However, the number of published articles of original palliative care research had not increased significantly during the same period. 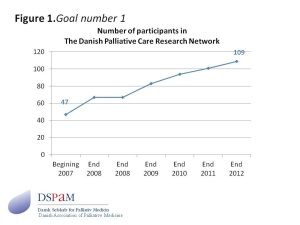 DPCRN has now grown to 109 members since 2006 (Figure 1). However, the number of published articles has not increased significantly (Figure 2). This discrepancy is probably rooted in the fact that not all network members are researchers, DPCRN being an open network. Furthermore, many researchers also publish papers that are not purely palliative care research, and therefore not registered in this context.

Since 2006, the DPCRN has been holding annual meetings. Here, Danish palliative care research projects are being presented and discussed, as well as more general research topics. The meetings are highly valued among the participants. Moreover, the National Board of Health invited us to participate as reviewer when the national recommendations for palliative care were being revised and republished in 2011. 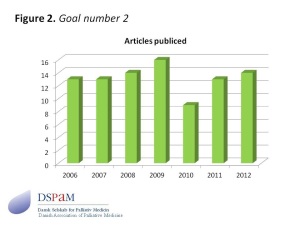 We believe that the DPCRN plays a significant role in the scientific development of palliative care in Denmark. The support and collaboration opportunities in such a network are vital in a country where the political commitment to development of organisation, education and research in palliative care has so far been sparse.

To find out more…
More information (in Danish) about the Danish Palliative Care Research Network is available from the website of the Danish Society of Palliative Medicine – just click on the link ‘Forskningsnetvaerk’.

Click here to read how other national organisations have used the framework of the Budapest Commitments to develop palliative care.

Coming up…
Follow the blog in the coming weeks to read more about the Budapest Commitments. All published material will be summarised by Dr David Oliver in his guest editorial in the May/June 2013 issue of the European Journal of Palliative Care and will be presented at the 13th World Congress of the European Association for Palliative Care in Prague 2013.