CONTINUING OUR SERIES TO CELEBRATE THE INTERNATIONAL YEAR OF THE NURSE AND MIDWIFE 2020 AND THE BENEFITS THAT NURSING AND MIDWIFERY BRING TO THE HEALTH OF THE GLOBAL POPULATION.

To mark this world first, the European Association for Palliative Care (EAPC) is publishing a special series of 12 monthly posts to honour the work of nurses who work in palliative care and draw attention to several issues that are linked to this crucial workforce. Today, we are delighted to welcome as our guest writer, Rose Kiwanaku, the first palliative care nurse in Uganda who went on to a national role in leading the Palliative Care Association of Uganda.

My dream to be a nurse started at the age of eight – even before the concept of palliative care existed in Uganda. The words ‘Palliative Care’ were not in my vocabulary and I did not know it would be my career path. Admitted to hospital with measles in 1968, I was attracted to the nursing profession by a compassionate nurse. She was smart, gentle, and caring and I admired her pink uniform. On discharge I told my mother I was going to become a nurse.

I started my nursing journey as an enrolled nurse. After seven years’ practice I upgraded my training, gaining a Bachelor’s Degree in Nursing from Aga Khan University, the School of Nursing and Midwifery in East Africa, and finally gaining Palliative Care Diplomas from the Institute of Hospice and Palliative Care in Africa and Makerere University.

In 1980, I joined St Francis Nsambya School of Nursing and Midwifery in Kampala and trained as a registered nurse. For the next ten years, I worked in various departments of the hospital: medical, surgical, theatre and paediatrics. I enjoyed my work but seeing patients in pain and being unable to alleviate their suffering left me with feelings of frustration and a lack of fulfilment.

How I got to know palliative care

Dr Anne Merriman, a British palliative care doctor who was visiting Uganda to see if it would be feasible to set up a hospice there, visited St Elizabeth ward where I was in charge of the ward.

“Do you have patients in pain,” Dr Anne asked. To me, the question was unrealistic because most of the patients were post-operative and were expected to have pain. Even so, there were patients in severe pain because of advanced cancers and my understanding then was that ‘not much could be done for them’.

Nonetheless, I thought about the ‘difficult patient’, as she was labelled by the health workers, a woman who had been abandoned by her husband because he could no longer afford the hospital bills. She could be a good case to start with, I thought. She had been isolated in a side room. Everybody was tired of the noise she made due to severe pain and the foul smell. She had cancer of the cervix and was HIV positive.

“What analgesic is she on?” Dr Anne inquired. Confidently, I replied that it was paracetamol and that she had exhausted her eight-hourly doses of injectable morphine. The doctor had discontinued the use of injectable morphine for this patient. Dr Anne immediately gave the patient a yellowish-brown tablet and asked her to chew it. I later learned it was a morphine slow release tablet (MST). Within ten minutes the patient was able to sit up in bed and respond to some questions from Dr Anne. A full history of her pain was taken, a body examination completed and the pain charted. It was the first time I’d seen a doctor plot pain on a body chart as the patient explained it.

The patient was left with some medication at the bedside and, together with her caretaker, was taught how to use it. The following day, the patient had a smile and reported a good night’s sleep. The foul smell and pain had reduced. Was this true? I was puzzled. This was like a dream. The patient’s pain had never been controlled during the five days she had spent on the ward and the foul-smelling discharge had increased day-by-day. This was indeed a miracle. I was tasked to monitor the patient’s pain and, if under control, she would be discharged and continue with home-based care.

Through that experience, I developed an interest in Dr Anne’s work and decided to work alongside her whenever she visited my ward. I stopped avoiding patients in severe pain because now I was confident – I had Dr Anne to consult. It became easier to interact with them and the number of patients in agony declined.

In 1993, I enrolled on the first palliative care course organised by Dr Anne at Mulago Davis Lecture Theatre. The training ran for seven weeks with classroom teaching on Friday afternoon and Saturday mornings to minimise interruptions from work, since participants were very busy doctors and nurses. To my surprise, I was the only professional from my hospital on the course despite it having been advertised widely. Many healthcare workers were scared about caring for dying patients. A session that captured my attention most was, ‘Breaking bad news’ – a huge challenge on my ward. Doctors feared breaking bad news to patients and usually I was asked to do it. However, the Nursing Act does not protect nurses on this subject but also neither was I skilled nor empowered to take on the task. As a result, many patients remained unaware of their diagnosis.

Occasionally, doctors discussed the patient’s diagnosis and condition with only the relatives, causing anxiety between patients and relatives. Then relatives would tell the patient that doctors could not make a diagnosis, thus they had to go back home. No wonder families left hospital and opted for traditional medicine. I also learned about ‘Total Pain’, a topic I found very interesting, as I had never reflected on how social, psychological and spiritual pain could compound the physical pain. I came out of the training geared to change the world. I tried sharing what I had learned with colleagues on St Elizabeth ward but, to my dismay, there was no enthusiasm or interest. I was deflated, but I had a strong urge to pursue palliative care as a career.

In 1994, I made up my mind and officially declared to my employer and friends that my career path was changing to palliative care. “You are committing career suicide, Rose,” many of my friends said. “There is no future working with the dying other than depression; you are going to kill patients using morphine; you will soon regret the decision you are making.”  However, the relief and smiles of the patients I saw in their last days of life while working with Dr Anne gave me a lifetime’s satisfaction. I had seen the light in the tunnel and negative words could not deter me.

Here, I continued to further advance my skills in palliative care on the job and through formal training. In 1995, I attended a palliative care course in Oxford, UK, organised by Dr Robert Twycross, followed in 1997 by a Train the Trainers’ course in the Netherlands organised by Dr Ben Zylicz and team. The training improved my clinical skills, empowered me with training skills and gave me the confidence to lobby for support from key stakeholders: policy makers, district health leaders, and ministry of health officials. On return to Uganda, I was appointed to head the Education and Training department at Hospice Africa Uganda. Keen to share what I had learned; my dream was to encourage all nurses in Uganda to undertake palliative care training so as to create a critical mass that would influence the healthcare system. This critical mass would enhance the spread of palliative care to the district health facilities of Uganda, making the services easily accessible to all patients who needed it. Realising the need for greater professional and public awareness of palliative care, we started to train people who would support the nurses in providing palliative care in their workplaces. Curricula for different groups were developed: short courses for health professionals, non-health professionals (ie carers and other professionals), spiritual leaders and traditional healers. Traditional healers were targeted because of their influence on patients. The trainings were popular and helped to increase public awareness of palliative care. Now affiliated to Makerere University, the Institute of Hospice and Palliative Care in Africa grew, and offered the Diploma in Palliative Care and Degrees in Palliative Care. There was intense advocacy for palliative care-trained nurses to become prescribers of oral morphine, a medication of choice for moderate to severe pain as recommended by the World Health Organization.

A move to the Palliative Care Association of Uganda (PCAU)

In 2006, I moved to the Palliative Care Association of Uganda (an organisation that supports and monitors implementation of palliative care in Uganda) as a founding director. My aim was to work with nurses to spread palliative care throughout Uganda through advocacy, education and training. With tuition fees a major constraint for nurses, I sought partners to set up a scholarship scheme to support nurses interested in specialising in palliative care. In 2009, PCAU partnered with the Center for Hospice Care in USA, which offered to provide 10 scholarships a year for nurses. (Sadly, some hospital administrators did not allow nurses to take advantage of this on the grounds of  staff shortages in the health facilities – to them, palliative care was not an important service). But those nurses who did undertake the training were empowered and enthusiastic to set up hospital palliative care teams. Fourteen regional referral hospitals out of 16 now have hospital palliative care units headed by specially trained nurses As most government hospitals do not provide home care, patients are discharged to one of the 15 standalone hospices or palliative care programmes scattered across different districts of Uganda. 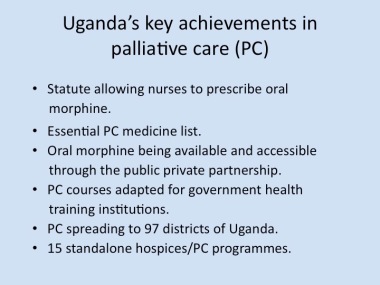 My 27-year journey in palliative care has seen many achievements alongside its integration into the healthcare system and ministry of education. In 2019, Mulago School of Nursing and Midwifery, the first government training school in Uganda, started an Advanced Diploma in Palliative Care Nursing, with many nurses receiving scholarships from PCAU. The increased number of palliative care trained nurses, increasing numbers of patients with palliative care needs and the fertile, political ground have enabled palliative care to spread to 97 districts of Uganda, though with varying levels of service provision.

I have experienced palliative care in different settings: England, the Netherlands, Poland, America and Africa. Now retired, I can look back with happiness and pride on what we have achieved in Uganda. Patients have a right to be pain free and the nurses who are alongside them need to ensure that this is attained. Let all nurses be empowered with palliative care knowledge.

View the series here and join us again in August when Anja Oustalet from France will be our guest writer.

9 Responses to Becoming the first palliative care nurse in Uganda