Art therapy and the restoration of capacity in palliative care

CATCH UP WITH SOME OF OUR ‘PAST POSTS’ – TODAY WE’RE REPUBLISHING ONE OF OUR FAVOURITE POSTS FROM THE ARTS IN PALLIATIVE CARE SERIES.

The series looks at how the arts in palliative care settings can be a powerful and effective way of addressing the practical, psychological, social and spiritual issues that face people at the end of their lives.

Today, Irene Renzenbrink, art therapist and social worker from Melbourne, Australia, looks at how the arts can unlock opportunities for creative expression.

Irene Renzenbrink working on a project.

Although the benefits of art therapy in reducing anxiety and depression in oncology and palliative care patients are well known, services are still limited by lack of funding and the perception that these services merely offer simple diversion. However, the use of the arts in therapy can restore a sense of capacity that is often lacking when patients feel helpless, passively undergoing their experience of illness. According to Nigel Hartley (in Monroe and Oliviere, 2007), patients are often “surprised by their artistic efforts, giving them an unexpected feeling of self- worth as well as a new sense of meaning to their living and dying.” Family members, friends and staff can also experience the relationship with the patient in a ‘fresh and new way’. 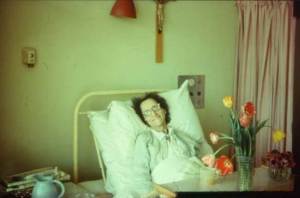 When Mrs Hinson (pictured here) was a patient at St Joseph’s Hospice in East London, UK, in 1964, she gave her doctor, Cicely Saunders, a description of various symptoms and ills and then went on to say, “Well doctor, the pain began in my back, but now it seems that all of me is wrong.” It was through conversations with patients and Saunders’ holistic training and deep compassion that the concept of total pain was born. (Clark, 2014). However, a focus on everything that is wrong can lead to what is known in expressive arts therapy as ‘problem saturation’. While it is, of course, essential to focus on pain and symptoms in order to relieve a patient’s suffering there is also a danger that opportunities to ‘lift the spirits’ through imaginative creative expression will be missed. 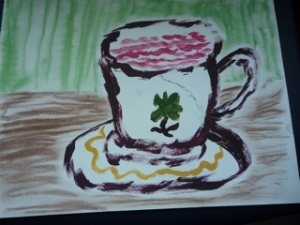 A devoted but exhausted daughter whose elderly mother was dying was encouraged to use some art materials while we sat together at the patient’s bedside. She painted a cup that was cracked but it still held her favourite raspberry tea. ( Fig.2) Surprised and pleased by her efforts, she went on to say, “ I feel broken. I feel like I’m losing myself.” She went on to ‘mend’ the crack in the cup with glue as if to restore her sense of self.

A man in his late 50s who often felt that he had been defined and judged by his history of addiction, unemployment, and estrangement from family, was being treated for incurable and terminal cancer. Familiar with art therapy after being involved in a rehabilitation programme he used soft pastels to draw what he called, “Life’s ups and downs.” (Fig. 3) 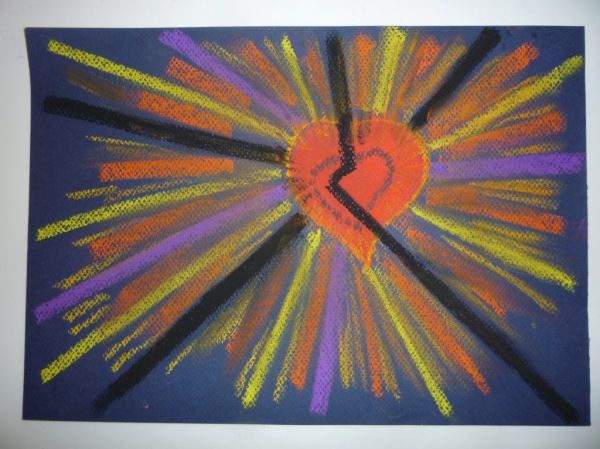 When I asked him about the inner heart that he had drawn with a wavy line inside the larger red heart, I was deeply moved by his reply: “That’s the part of me that’s still whole.”

We must not forget that art-making in the context of a therapeutic relationship can help patients make visible some of their deepest thoughts, feelings and aspirations. Opportunities to engage the imagination can also lighten their mood and restore a sense of capacity.

When a patient feels broken and says that “all of me is wrong” we can help them to discover or reconnect with that part of themselves that still feels whole.

Clark, D. ‘Total pain’: the work of Cicely Saunders and the maturing of a concept. September 25, 2014, End of Life Studies, University of Glasgow. Retrieved from endoflifestudies.academicblogs.co.uk September 25, 2017.

More about the author . . .
Irene Renzenbrink is an Australian social worker and art therapist who has worked in the field of palliative and bereavement care for 40 years. She is currently completing a doctorate in Expressive Arts Therapy at the European Graduate School in Saas Fee, Switzerland. A member of the International Work Group on Death, Dying and Bereavement, Irene will be teaching Master Classes for Cruse Bereavement Care in the UK in early 2018.

Read more posts in the Arts and Palliative Care series on the EAPC blog. We shall be publishing one post each week from therapists, health professionals and others involved in bringing the arts into a palliative care setting.