Searching for meaning: A film for Dying Matters Week 2019

Every year in May across the UK, Dying Matters and its members host an Awareness Week, placing the importance of talking about dying, death and bereavement firmly on the national agenda. Jean-Francois Rodrigues hopes that his documentary film will help to raise awareness and empower people to ask the right questions to the right people.

As a documentary filmmaker, at no point did I ever imagine how close and personal my next film would be. This post explains the inspiration for my film, Searching for Meaning, which is being  shown during this year’s Dying Matters Week.

It’s a year since my mother died in hospital from cancer at the age of 93. Her time in hospital was short, only a week from diagnosis to her death. Unfortunately, my mother was a victim of misdiagnosis. Prior to hospital, she was treated for acid reflux, instead of receiving the palliative care she so deserved. When finally diagnosed with terminal cancer, the palliative care she needed still eluded her.

Nevertheless, not all the blame should fall to those who medically cared for her. I, as her son, need to shoulder some of the blame. I was familiar with the term ‘palliative’ but, even at the age of 53, and with all my life experience and that I too am receiving palliative care, I was clueless about what it really meant. I insisted that my mother stayed in the hospital, even though there was nothing they could do for her. I had no idea it was OK for my mother to go home and that assistance would be offered during her time there.My mother never wanted to die in hospital and had I known that her lifespan was a mere few days, I would possibly have allowed her to die at home.

So where did this leave me? At first, I wanted to justify my ignorance by telling myself  “Well does anyone reallyknow what palliative care is?” Then, with the help of Google and by asking around, I discovered that the lack of understanding was rampant. So I was proven right, but not vindicated.

Dame Cicely Saunders, founder of the modern hospice movement, said: “How people die remains in the memory of those who live on.”

How my mother died stays with me to this day. So, to help others avoid my situation, Searching for Meaning was born. 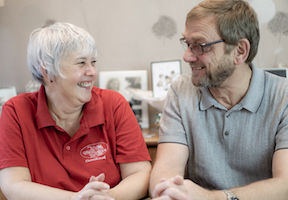 Laura and Peter Bashford – Laura is featured in the documentary and is one of the most inspirational people I know (Jean-Francois Rodrigues).

The narrative is different from most palliative care documentaries. The aim is to raise awareness and encourage open and honest discussions about death. In the film I start from the beginning and examine why death is still taboo; I dispel myths about palliative care and the fear sometimes associated with hospices. I also break down what end-of-life care means, what care is currently available, what is the care of the future and so much more. However, the documentary is not without that personal connection. I interview a patient diagnosed with terminal cancer. Her story is not one of dying but of her living the best she can. It’s a beautiful story and we talk to her family who also rejoice in her life knowing their time with her is limited.

As a filmmaker, people encouraged me to make a documentary about the poor service my mother received. I declined because I felt that showing the negative side of an institution where a lot of good people worked, would not have had as big an impact as using the documentary to educate and empower people to make an informed decision, by raising awareness around end-of-life care and palliative care.

I hope that my film will enable people to ask the right questions to the right people. Is that not what most of us want? Our questions answered and our minds put at ease?

To find out more