Doctors and vets are starting to talk together more through the WHO’s One Health initiative. But how many are comparing professional notes about supporting patients and caregivers facing the end of life? 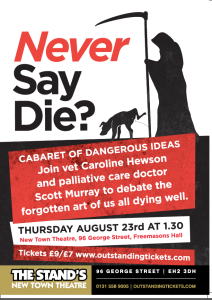 This unusual show came about at the Edinburgh Festival Fringe in August 2018 because Caroline had heard about the three typical trajectories of physical decline that are now often mentioned in palliative care for humans (Illness trajectories and palliative care | The BMJ). Some veterinarians in America are already talking about those patterns and Caroline too was struck by how family pets can show the same three patterns of decline as humans, ie acute, intermittent and gradual. She now refers to these to help vets and pet-owners that are deciding how best to manage life-limiting illnesses in pets (www.thepetlossvet.com). So, Caroline and I decided to speak together at this public event, thinking that the general public might find talking about their pets living and dying well easier than talking about their own mortality. And so they did!

The first statistic highlighted humorously to the lively audience of pet-owners and others was the fact that humans and pets all have a 100 per cent mortality rate, despite great progress in medical and veterinary sciences. And this death rate was not likely to change! 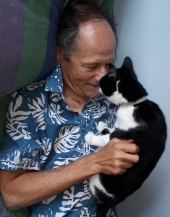 Rescue cat, Lupin, with his owner.

The second fact we shared was that pets and humans die following similar patterns of decline. For example: larger-breed dogs are prone to osteosarcomas that rapidly progress, cats frequently get kidney failure, and many of our furry friends can become frail and get arthritis. Sudden deaths are uncommon now for everyone.

The audience then spoke out about what frightens them about their own or their pet’s demise. Pain, anxiety, relationships, facing death and honesty were all shouted out. One person said she cried when her dog died but could not when her mum died. We also heard that pets, like humans, can quite often receive futile overtreatment. After heart-felt discussions, it was also good to share the fact that palliative care can help deal with all these diverse issues if help is requested early on in the course of the illness. 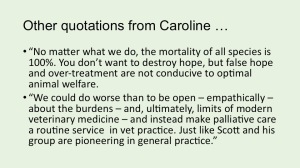 It is good to talk about the final frontier, to boldly go and discuss it, and prepare for likely eventualities … and then get on with living a full life until then. Having considered our mortality, life may be more meaningful and richer than before! Considering the likely course of events for pets can also help them receive the most appropriate treatments for them, and not necessarily everything that could be done!

Acknowledgement: With grateful thanks to Bruce Mason for producing some of the images used in this post.

Next week on the EAPC blog, Noreen Holland introduces Rían: The therapy dog who’s a leading member of the team at Our Lady’s Hospice in Dublin, Ireland.