In October 2015, the World Health Organization Eastern Mediterranean Region (WHO EMRO) organized the third ‘Train the Trainers’ workshop about palliative care. As a special adviser to the WHO EMRO, Professor Sheila Payne met leaders in palliative care from the region and invited them to contribute to this special series on palliative care in North Africa and the Middle East.

Participants at the WHO EMRO ‘Train the Trainers’ workshop in Kuwait, October 2015

A question we are often asked is about the applicability of hospice and palliative care principles in Jordan and barriers to implementation. From the perspective of a palliative care physician trained in North America I have found no major difference in practising and applying palliative care principles in Jordan. Jordanians may have different cultural values and preferences; however, they are no different from any other population in their reaction to terminal illness and their experience of suffering. Patients are in need of effective communication skills, effective symptom and pain management and effective end-of-life care.

Jordan is a Middle Eastern Country with a population of 9.5 million in 2015. The predominant religion is Islam, Muslims make up 97.2 % of the population and 2.2 % are Christians. The country is classified as upper-middle income and the predominant language is Arabic. Health care in Jordan is considered one of the best in the region; in 2014 the estimated annual cancer burden was 6,000 new cases and around 50% present in the advanced stages. Hospice and palliative care started in Jordan in the early 1990s with a stand-alone, not-for-profit home hospice, named Al-Malath. In 2001, the Jordan Palliative Care Initiative emerged, and a National Palliative Care Committee was created under the Ministry of Health to oversee the development of palliative care in the country. The National Palliative Care Initiative and the National Palliative Care Committee are led by King Hussein Cancer Center (KHCC) in collaboration with the Ministry of Health, the World Health Organization and key stakeholders from governmental and non-governmental organisations. The main objectives are to increase opioid availability and access, build capacity of palliative care by increasing educational and training opportunities and encourage healthcare services to incorporate palliative care. 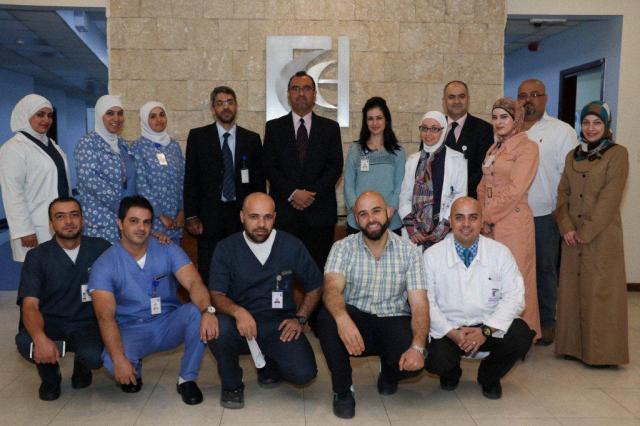 There are remaining challenges to overcome, including the accreditation of a palliative care fellowship by the Jordan Medical Council, the formation of the Jordanian palliative care board certification to increase specialty recognition and improvements to provider reimbursement. Further challenges are to increase opioid availability and access in the peripheral governorates of Jordan, to increase the number of palliative care services in all healthcare settings and to create a hospice and home care national insurance plan to improve access and make these service affordable to all.

All Jordanians deserve to receive the best health care possible when they are suffering from a terminal illness. They deserve optimal treatment for their pain and other symptoms regardless of their age, sex, religion, or where they reside.

Read more about Palliative Care in North Africa and the Middle East on the EAPC Blog . . .
If you missed any of the previously published posts in this series you can read contributions from Djibouti, Egypt, Sudan and Saudia Arabia.

With special thanks to all the contributors to this series and Prof. Sheila Payne.